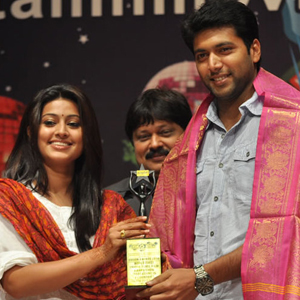 Edison Awards-2010, on its third venture, held in a great grandeur.
The event has started traditionally by a Bharathanatiyam dance
performed by Actress Shammu. Continuing it, Choreographer Poppy’s
dance troupe dazzled the dais with their admirable performance.

Co-artists played for 3 songs while dancer poppy has danced with
co-artists for five songs. Altogether 9 songs had been performed on
stage including actress actress Shammu’s dance. Playback singer
Velmurugan has made the audience to quit from their seats to dance on
singing his Gana song ‘Adungada Machi Adungada’. Nakka Mukka fame
Chinna Ponnu, too made the viewers in gala by her spiny voice of
‘Mannarkudi kalakalakka’.

Other peak cine celebrities, Tamil television directors, businessmen,
producers, Ambassdors from Abroad attended and graced the event. The
event went on splendidly for more than three and a half hours.